On to the next two days of the trip which focus on the city of Bilbao.  Bilbao is the capital of the Biscay (Vizcaya in Spanish) province of the Basque Country and has a population of around 350,000.  The city is nestled between the incredibly green Basque mountains.  The city experienced heavy industrialization at the end of the 19th century and beginning of the 20th century.  So the city was never thought as a tourist destination.  However in the 1990s, Bilbao started a process of de-industrialization.  The opening of the Guggenheim Museum in 1997, the new airport terminal, the new tram line, and the Alhondiga (Basque cultural center) are all part of the revitalization of the city.

If you would like to know more about Bilbao’s geography, climate, government, and history (which involves wars, Spanish monarchs and nobility, and Franco) you can go to the Wiki link (I especially recommend the section on architecture if you don’t feel like reading anything else): http://en.wikipedia.org/wiki/Bilbao,_Spain

When we all met up Saturday morning, our leaders took us for  a walk along the river (actually called the estuary of Bilbao but for all intents and purposes, let’s just call it a river), pointing out various buildings and talking about the architecture.  The theme for this trip was “Urban transformations: from industrialization to the post-modern.” I’m not very familiar with the different architecture terms since I have never taken a class about architecture and I’m definitely no engineer.  However it was very obvious just by looking at the buildings in Bilbao that the city had once been very industrial and it was very easy to spot the newer looking buildings that have cropped up in the last decade or so.

Anyways the architecture in Bilbao is fascinating.  Older buildings co-exist with modern structures built in the last ten to fifteen years.  I suppose this makes Bilbao look sort of schizophrenic–as if the people who planned the city weren’t very sure what they wanted it to look like.  I guess in a way it does, but the weirdest thing is that it just seems to work.  At least, it works for me.  I’m sure there are people who will say Bilbao is ugly and not worth the trip.  I remember saying I didn’t like Berlin that much because I thought the architecture was too modern and lacked character (and a lot of older buildings in Berlin have been torn down so the city needed to rebuild itself).  However I didn’t find that to be the case in Bilbao.

And then finally we got to finally see the Bilbao Guggenheim Museum.  We were on the other side of the river when we first spotted it so we got to fully appreciate its gargantuan size and its very modern architecture.  The museum was designed by Canadian-American architect Frank Gehry.  As I said, it is located right along the river and many experts have lauded the building’s design.  In person, the museum is definitely overwhelming–it reminded me of a wavy looking kind of silver boat (apparently Gehry gets his inspiration from fish so there’s definitely some maritime theme going on in the design).

A very BRIEF quote from Wiki: The curves on the building were to appear random. The architect has been quoted as saying that “the randomness of the curves are designed to catch the light”. When it was opened to the public in 1997, it was immediately hailed as one of the world’s most spectacular buildings in the style of Deconstructivism,

Other words such as organically sculpted contours and titanium fish scales are used in the description of the museum’s appearance but I don’t really know what that means.  All I know is this building is very different from anything I’ve ever seen and I’m going to sum it up in a very underwhelming way: it was very cool.

Inside the museum (which is just as awesome as the outside), the collections change pretty frequently.  When I visited, there was this exhibit called “Haunted: Contemporary Video/Photography/Performance” which is apparently our coordinator’s specialty.  I thought this exhibit was okay but I really loved the “Chaos and Classicism” on the third floor which had something to do with dictatorships/Franco.

The only permanent exhibit in the museum is called “Matter of Time” designed by Richard Serra, which are a series of steel sculptures that are built into these kind of labyrinthine spirals.  Visitors are encourage to enter the spirals (and each spiral is different) and feel completely lost and disoriented trying to reach the center of the sculpture.  It’s weird what you experience as you enter the labyrinth–excitement, anxiety, confusion, disorientation.  At some parts where the passage narrowed/widened, I found myself tilting in the direction the steel was bending.  Pretty guay (Spanish for cool, pronounced gu-why) if you ask me.

After spending some time in the museum, we wandered around the building itself for awhile.  Along the riverfront, there are some cool sculptures, such as the semi-famous humongous spider called “Maman” by French sculptor Louise Bourgeois.  In front of the museum, there is this giant dog entirely made out of flowers called “Puppy.” The flowers are maintained year round which is kind of crazy.

After getting lunch with people from my program, I actually went back to the museum to see the 3rd floor because I hadn’t gotten to see the whole thing.

We did another guided tour of another section of Bilbao and again focused on the different buildings.  We went to the Alhondiga (which I confused with the word albondiga which is Spanish for meatball… oops!), this Basque cultural center/shopping mall thing.  There was some kind of exhibit going on about the transformation of Bilbao as a city through space and time.  I didn’t really understand it too much and while most of my classmates went and watched some movie about the history of the city, I stayed behind to color a card.  There was this interactive exhibit going on full of index cards in which people had written what they thought Bilbao needed as a city in the future.  I thought I was supposed to merely write down what I thought about Bilbao but whatever haha.  All the index cards were put together on the floor to form buildings so the whole thing looked like a mini city.  I added mine to one of the index card buildings so I suppose that is my contribution to Bilbao’s future.

After some free time, we met up with NYU later for dinner at this restaurant not too far from our hotel.  I remember eating fantastic paella, steak, and flan for dessert.  Yum!

The next day we visited the “Casco Viejo” part of Bilbao–the old part of the city that used to be surrounded by fortified walls.  There were a lot of shops, taverns, and churches in this neighborhood.  I suppose the highlight of this walking tour was the Plaza Nueva (basically Bilbao’s Plaza Mayor).  As is typical for Spanish squares, the plaza is surrounded by arcaded buildings and accessed by arched passages.  We were there on Sunday and the plaza was crowded with men and there was some kind of flea market going on.

We had some free time so some other girls and I visited the Basque Archeological Museum which was all about the history of Basque culture.  It was interesting to a point–honestly it seemed Basque history did not differentiate too much from the rest of Europe.  They were sheep herders, fished, knitted, grew fruits and vegetables… I mean, it’s not like they didn’t do that in the rest of Europe in the early 20th century! But it was interesting nonetheless.

And then it was back on the bus for a 6 hour bus ride back to Madrid.  It was kind of hard to leave all the greenery behind–I love Spain but sometimes I miss the forests that I’m accustomed to seeing back at home.

Alright, that’s it for now.  I do have some really big news: I am staying in Madrid for another year! But the details will have to wait for the next post.

old and new buildings in Bilbao along the river

first glimpse of the Guggenheim Museum 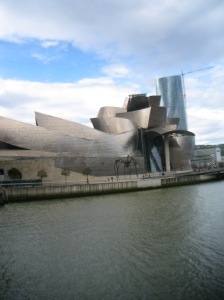 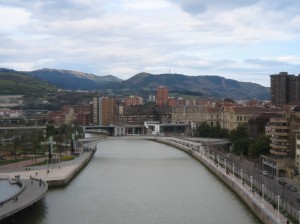 Guggenheim from a different angle 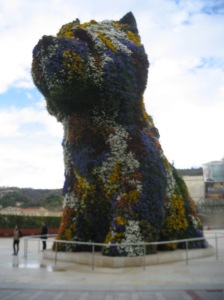 Puppy sculpture by Jeff Koontz in front of the museum

Basque mountains with city of Bilbao