Blast from the Past 4: Bryce Canyon National Park

March 17th 2010 we headed towards Bryce Canyon. I was excited for this national park. After Zion and Coral Pink Sand Dunes, I was eager to discover what else southern Utah’s natural landscapes had to offer. Unfortunately, I think we miscalculated the best time of year to visit the park. Bryce Canyon has a higher elevation than nearby Zion, shifting between 8000 and 9000 feet depending on the location. In mid-March, the place was buried under the snow—in some places the snow went way over our heads.

As you can see by this picture, I am clearly not exaggerating about the snow. And yes, those are my parents whose faces I cut out. Nothing against the Internet (they’ve both got Facebook, they’re up with the latest technology) but they value their privacy. 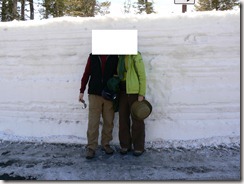 We didn’t have the equipment to go hiking in the snow so we had to make do with the scenic drive, which was nice enough but a little disappointing. I would definitely like to return to Bryce Canyon in the summer someday and experience the hiking trails.

The last known Native American tribe to inhabit Bryce Canyon were the Paiute Indians. European settlers started arriving in the area in the 1850s. The canyon got its name from Ebenezer Bryce, a Scottish immigrant who moved into the canyon with his family to raise cattle and grow crops. When asked what he thought about living in such a beautiful place, he famously replied something alone the lines of “Well it’s a helluva place to lose a cow.” Seems like he was a rather to the point kind of person.

Bryce Canyon is most famous for its natural Bryce Amphitheater, a stretch of land that is 12 miles long and 3 miles wide. The amphitheater showcases the rather curious looking hoodoos—which is a tall and thin spire of rock that sticks out of the ground, topped off by a roundish shape referred to as a cap. They kind of look like totem poles. The Paiutes believed hoodoos were the “legend people” frozen into stone and had been tricked by the Coyote.

I took many pictures of the hoodoos because I was so fascinated with this bizarre geological phenomenon. I have to say, the red hoodoos contrasted with the white snow made for some really great photo ops. 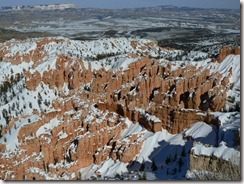 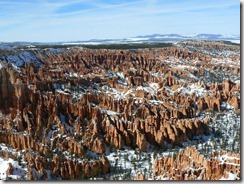 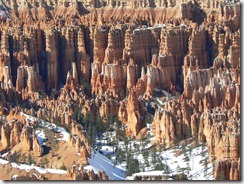 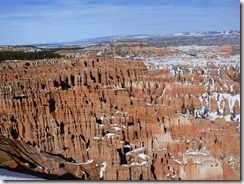 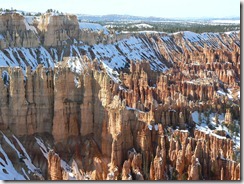 Bryce Canyon also has a lot of fir trees. Fir trees, hoodoos, and snow—dazzling Mother Nature at her best. This week out in Utah made me realize how it is so easy to take our planet for granted. 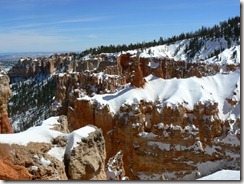 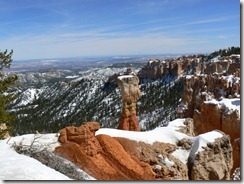 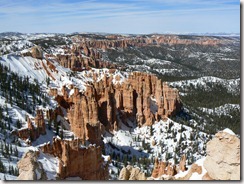 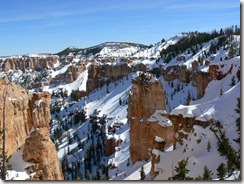 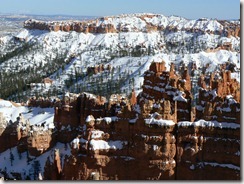 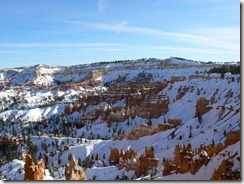 It seems this may have been the first time these fellow tourists had ever seen snow, if the snowman perched atop their car was any indication: 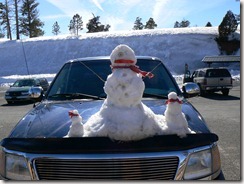 And some local wildlife: a vibrant blue bird I failed to get a decent picture of and what I think may be the endangered Utah prairie dog. 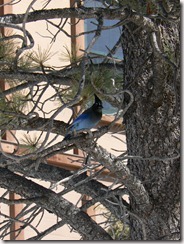 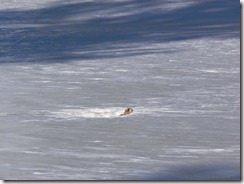 And the dramatic view behind the cabin-hotel we stayed in: 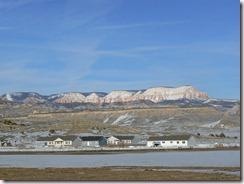 There is so much out there to explore and discover but then we get tied down with jobs and families (not necessarily a bad thing!). Unfortunately I cannot make a living off of visiting the USA’s national and state parks or just travel for the fun of it for months on end. Some people do manage both—but they are far and few between.

When I eventually get the chance, I would love to return to Bryce Canyon during the summer.