Hi, my name is Amelie and I like to hoard change.

This post has nothing to do with Spain, living abroad, or what is going on in my life. It’s totally random and I’m not really sure what triggered the need to write about it. But then I started thinking about this subject and then it wouldn’t shut up in my head.

So I have a confession to make: I hoard change. 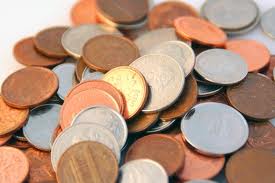 We all have weird habits and oddities that make us who we are. Some of us steal pens, some of us count the cracks on the sidewalks or go out of our way to not step on them, some of us eat the inside of couch stuffing (I once saw this on My Strange Addiction and definitely never made the mistake of watching that again). You get the picture.

However, I seriously think I am the only one with this change problem. Recently, my mother cleaned out my bedroom back at my house in New York and found several hundred euros worth of change. She wanted to know why I had so much change lying around and why I didn’t do anything about it.

I have to be perfectly clear about something: I loathe change. I hate it with every fiber of my being. I do not hoard change because I like collecting coins. I hoard coins simply because I do not know what to do with them.

I think my aversion to change has a lot to do with the fact I hate waiting in line in stores at cash registers and that I am terrible at math. I don’t mind paying for things I buy. However, for some reason, I get super stressed out when it’s my turn to pay. I rarely ever hand over change to the cashier. It’s easier handing over the bills. Like I said, my mathematical skills are zero and I don’t want the people behind me getting impatient because I am fumbling over how many pennies and dimes to hand over to the cashier. To make matters worse, the tax is only added to the price when you finally go up to the cashier (however in Spain the tax is already included in the price which I don’t understand why this practice hasn’t been adopted in the USA for the mathematically challenged like me). I always forget how much tax is and how much to add on to the price of whatever I’m buying. So I can’t calculate how much I owe before I get up to the register and have the perfect amount of change in hand.

So instead of looking like a mathematical idiot each time I have to pay for something, I just stick to bills. Bills are sleek, they can be easily folded, and easily handed over. Coins are round, are heavier, and take up a shit ton of room in my pocketbook (because I accumulate so much). 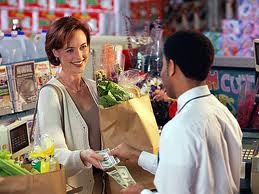 This woman is happy because she is paying with bills and not change.

No but seriously, why does change even exist? I swear it was just created to torment mathematically challenged people like myself who feel rushed each time we go up to the cash register. The only time I use change is when it comes to paying restaurant bills. In these instances, I gleefully empty my wallet of change and pay back in truckloads of quarters, dimes, nickels, and pennies (because I have ample time to count and recount before finally giving the bill back to the waiter). The waiters might hate me but it’s not my change anymore, so it’s not my problem.

Though I have to say American dollar change is not as bad as Euro change. The Euro not only has 1 and 2 euro coins, but there are fifty cent, twenty cent, ten cent, five cent, two cent, and one cent coins. That’s 8 types of coins to contend with–at least the US has decency to only torture me with 4 (the quarter, the dime, the nickel, and the penny).

Recently there have been one dollar coins circulating around but cashiers always seem super confused about what to do with these whenever I hand them over. Apparently having the Statue of Liberty on a coin is highly disconcerting. I don’t care either way, I just hate it because it’s another coin I have to somehow get rid of.

This coin confuses the majority of American cashiers.

I usually have a drawer/shelf wherever I’m living just full of change. I periodically give this change away. I can’t throw it out since it’s money and I know some of you are asking yourselves why I would ever give away money. I am not rich by any means. But seeing the change accumulate stresses me out to the point that I need to get rid of it. So I usually hand it off to my amused but confused roommates. To them, I’m coming off as generous. For me, I am simply passing along my problem to other people so I don’t have to deal with it.

It would be nice to know I am not the only one who suffers from fear of change–whatever that may be–changophobia?