Alright so I’ve already sung Heidelberg’s praises. Could Munich, the capital of Bavaria (and Germany’s third largest city) and the second stop on my 9 day European jaunt, be just as awesome? Well yes, it turns out it can.

All I knew about Munich before going there was that it was famous for Oktoberfest and that during the 1972 Olympics some members of the Israeli Olympic team were taken hostage (and then killed) by a group of Palestinian assassins. And the latter event was then used as the basis for the movie “Munich.”

Based on those two facts alone, I wasn’t sure what to expect from Munich. I had never thought of it as a place worthy of visiting before. I’m not the biggest fan of beer and I wasn’t really sure how to process that the only other thing I knew about the city was a sad and tragic event.

On the first full day we were there, we decided to split up. Nicole and Sarah went off to visit Neuschwanstein Castle, a fairy tale looking palace located in the heart of the Bavarian countryside and commissioned by the highly eccentric Ludwig II of Bavaria.

I decided not to go because the palace is about 2 hours away from Munich by train (therefore it requires a full day to visit it) and I wanted to take advantage of my time in the city itself since it was my first time there. If I ever return to Munich (and I hope I do), I will definitely make it a point to visit this palace–however, and I know it’s impossible to phrase this without sounding a tad snobby, I have visited many castles in Europe. I didn’t think it would hurt me to skip this one for the time being. I know it looks beautiful, I’ve seen pictures of the inside on Google Images. But I don’t regret my decision, so please don’t throw tomatoes at me!

Instead of getting up super early to join my friends, I slept in for a bit before setting off to visit another palace– the Nymphenburg Palace, to be exact. This Baroque palace was mainly used as a summer residence by the rulers of Bavaria and was built sometime in the 1600s. Among the most famous monarchs who resided there, Empress Elisabeth of Austria (commonly known as Empress Sisi) and her husband Franz Joseph had rooms there.

the front of Nymphenburg Palace

One of the most famous rooms in the palace is the “Gallery of Beauties,” an entire room adorned with the portraits of 36 women that King Ludwig I considered to be the most beautiful in his kingdom. The women ranged from noble families (including the king’s own daughter) to women of a more modest background–such as a shoemaker’s daughter. One portrait of note is that of Lola Montez, one of the king’s mistresses, who heavily influenced the king’s political agenda–to the point that she has widely become blamed as one of the triggers of the 1848 revolution that swept through Germany and which led to Ludwig I’s abdication. Lola’s story is rather fascinating (she ended up in New York) but I’ll leave that for another post.

Lola Montez’s portrait in the Gallery of Beauties

For a full list and portraits of the women who grace the walls of the Gallery of Beauties: http://en.wikipedia.org/wiki/Gallery_of_Beauties

inside the Great Hall of Nymphenburg Palace 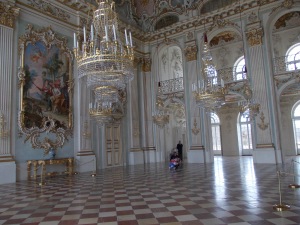 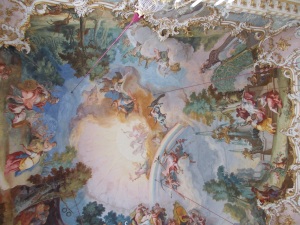 the ceiling in the Great Hall

After visiting the sumptuous royal apartments, I wandered around the grounds for a bit. Or if I want to sound really fancy, the “parterre.” Not so sure what it is but people assume if you throw some French in it, it automatically makes it fancy.

the back of the palace

The above statue could give Angelina Jolie a run for her money. And that’s a reference to this year’s Oscars in case you didn’t know. Angelina Jolie had a high slit on her dress and kept posing awkwardly with her leg sticking out EXACTLY like this statue, minus the triton. It’s a match made in heaven. 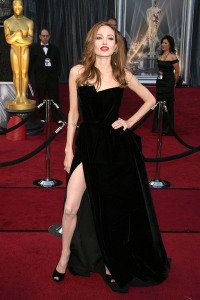 And the rest of the palace garden pictures:

I didn’t just visit this palace my first day but as usual I like to include too many pictures. Next up: more of the things I saw and did my first day in Munich.