The Legacy of the House of Alba

As you all may or may not know, I am absolutely fascinated by the Duquesa de Alba. Ever since I saw her limo in Ronda in 2008 and nearly got killed by overexcited Spaniards mobbing her car, I have read up on as much as I can about this intriguing lady. I know that her official home in Madrid is the sumptuous Palacio de Liria; in fact, I lived right by it when I was in Madrid. I never bothered trying to walk by it since the property is surrounded by high walls and most likely has a state of the art security system. The place is well-hidden by the tall trees and almost completely inaccessible to the general public.

This is an aerial view of the Liria Palace in Madrid. No way I was getting a glimpse of that from the street! 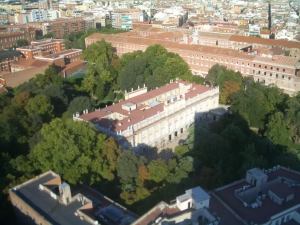 For the most part, this luxurious mansion is closed to the public. However, I found that it is open for a very limited number of hours every Friday from 10 AM to 12 PM. Of course there is a catch–only 16 people can enter at a time at specific time slots at 10 AM, 11 AM, and 12 PM. Oh, and there is a 2 year waiting list. On the plus side, entrance to the palace is free–that is, if you ever are able to get inside!

In the past, the Duquesa de Alba has been notoriously reticent for letting people get a peek at her extensive private collection of art and priceless artifacts which take up space in the myriad of extravagantly decorated rooms. She has opened the palace doors to the media a few times which is why I was able to find some interior shots of the palace on Google Images. 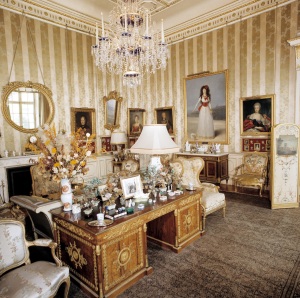 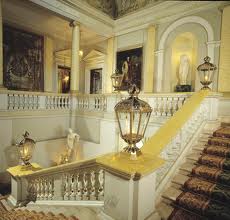 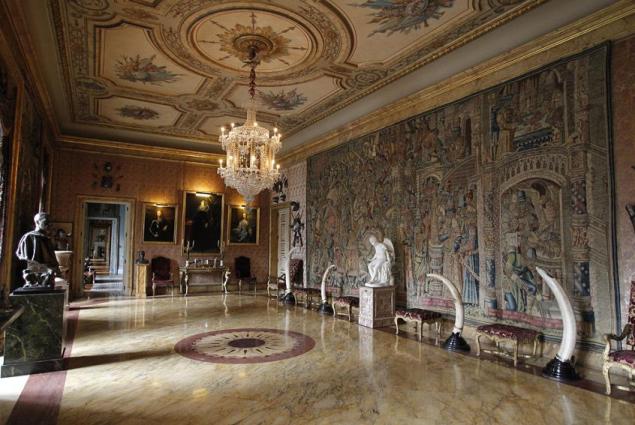 For the very first time, the House of Alba has agreed to put part of the collection (about 150 works) usually housed inside the Palacio de Liria on display at the Palacio de Cibeles, also known as Madrid’s City Hall. You can learn more about the exhibit entitled “El Legado de la Casa de Alba” (The Legacy of the House of Alba) at the official website (in Spanish) here. The exhibit is to be on display until March 31st 2013. It is not the same as actually getting to go inside the Palacio de Liria, but this exhibit is the next best thing. The New York Times had a great write up of the exhibit, which is where I originally learned about it. The exhibit features paintings by Goya, Rubens, Murillo, Zurbaran, and Titian, along with original letters written by Christopher Columbus and a first edition copy of Don Quijote by Miguel de Cervantes. Another great article I came across was the English version of El Pais’s “The Duchess of Alba’s treasure,” an article recounting the history of the noble Alba lineage and trying to figure out the enigma that is Cayetana, the Duchess of Alba.

I leave you with a few pictures of a spunky, younger Cayetana  posing in various rooms of her beloved Madrid palace. Some people may recognize the painting in the third picture that Cayetana is standing in front of–this portrait was painted by Goya himself and the woman in the painting is Cayetana’s ancestor, the 13th Duchess of Alba (Cayetana is currently the 18th to hold the title). Hands down my favorite picture is the one of her goofing off in the fountain which was taken in the Palacio de Liria gardens. This woman has such a playful spirit and doesn’t take herself seriously, despite being one of the richest women in the world and this is why I love her so much!

If you are in Madrid right now, do me a favor and visit this exhibit! I would go myself if I weren’t approximately 2,000 miles away. 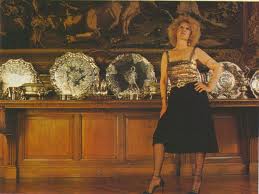 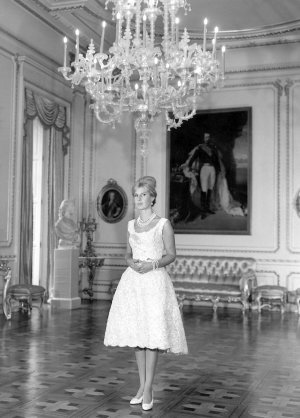 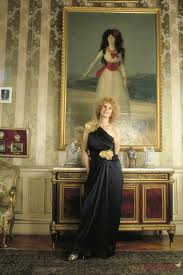 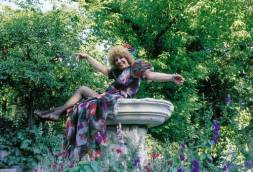