The island of Tatihou, located just off the coast of Saint-Vaast-la-Hougue on the Contentin peninsula, is only accessible by land at low tide; when the high tide comes in, the island is entirely surrounded by water, a characteristic it shares with Mont-Saint-Michel. I feel like this trait automatically gives tourists the impression that the place is mysterious. I’m not sure what it is exactly that draws people to these kinds of peninsula islands–maybe it is the fact that our comings and goings on foot to the island are subject to the rules imposed by Mother Nature and the changing tides? Am I making any kind of sense here? (It’s okay if the answer is a resounding no.)

Below, you can see the island of Tatihou and its very close proximity to the coast. It is very miniscule. 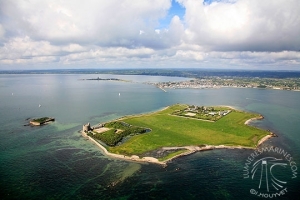 I’m sure the island of Tatihou (pronounced Tah-tee-oo, oo as in too, not Tah-tee-who) is a very charming place–when it is not pouring rain. I’m not exaggerating about that last part–it felt like we had been caught in a monsoon. I was so worried for my grandparents, especially my grandmother who uses a cane. I was so afraid she would slip and fall due to the wet ground. You can see in my last post the pictures I took of Barfleur–the sky was looking a mean shade of dark gray. That afternoon when we visited Tatihou, the heavens opened up and decided they would not close back up for the rest of the day.

Horrible weather aside, thanks to Google Images, you can see what the island looks like on a clear, sunny day. 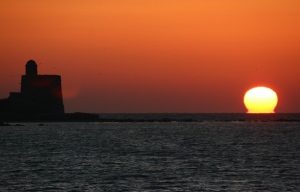 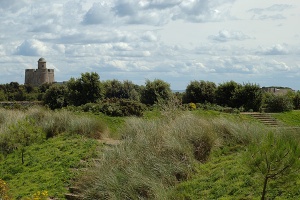 The curious name of Tatihou was bestowed to the island by the Vikings (is there a place those Vikings did not discover?) who wandered into the area sometime in the 9th century. Jumping forward in time, in 1689, a fort was established on the island and the tower of Vauban (now a UNESCO World Heritage Site) was built to defend the bay against potential invaders. During both World Wars, there was a military presence which included French, German, and American (not at the same time). For more information about the history of Tatihou, you can click here for the official Tatihou website (in French) or you can go to Wikipedia (in English).

My father bought our boat tickets that morning, before it started raining. We knew it might rain, but we decided we could put up with getting a little wet. Well, when the time came to get on the small boat that would take us to the island (since it was high tide), it was raining so hard that we got soaked to the bone in the five minute crossing to the island! The current was strong, so in addition to getting incredibly wet, we got tossed around as well.

These were taken as we were eating lunch in Saint-Vaast-la-Hougue on some benches. It was only drizzling at this point. Doesn’t my faceless father look snazzy with his rose print umbrella?

It was raining so hard that these were the only actual pictures I took on the island. It’s hard to see the rain in the pictures, but if you look hard enough in the picture with the Tower of Vauban, you can see the waves crashing against the rock wall. We were lucky that we were able to spend most of the visit inside the museum on the island, which was quite interesting in itself since it described the island’s history, focusing especially on the maritime aspect. I really wanted to walk out to the tower and my father and I did start to walk towards it. However, we had to turn back because of the force of the rain and wind–it just wasn’t worth it! This means there is a whole part of the island I didn’t get to see. 😦

Also it’s hard to tell, but the boat we rode in to the island is one of those DUCK type boats (made famous by the city of Boston with its Boston DUCK boat tours). This means the boat can float in the water and roll around on land on the attached wheels. 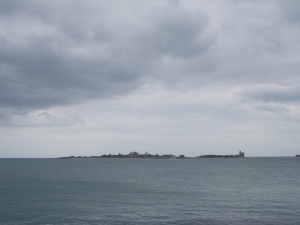 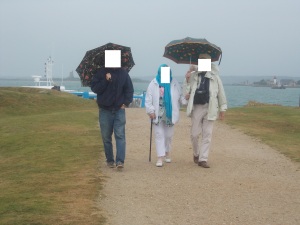 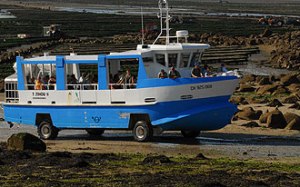 While our visit to Tatihou was ruined by the rain, I still enjoyed learning about the island’s history in the museum. Nobody complained about the awful weather–my grandmother was a good sport and put on a brave face, despite not being able to walk very fast out of the rain. I thought the whole thing was hysterical and absolutely ridiculous. I know for a fact that I won’t ever forget this island! Nor I am to forget any time soon my father with a rose print umbrella and having the whole thing turn inside out on him due to gale force winds!