Public Art: An Ode to the Street Signs of Madrid

For those of you who have lived in or spent any amount of time in Madrid, you may remember that the street signs in the downtown area of the city are these stunning hand painted tiles representing the name of the street in some way. I remember when I first came to live in Madrid in September 2010, I was struck by the intricate detail and quality of these street signs. I loved how something as ordinary and bland as a street sign could all of a sudden become a work of art. I don’t know the history behind these signs but I’m sure there’s a great story waiting to be told. During my time in Madrid, I photographed quite a few of them.

The first sign here Calle de Mira El Rio Alta (Street of High River Lookout) was taken near Puerta de Toledo and Calle de Madrid (Madrid Street) near Sol. All the signs are three by three, so a perfect square of a total of nine tiles. The background is generally always white, while the names of the streets are written in big black capital letters. I’m not sure of the story behind these two signs, though it is evident that the river was painted on Calle de Mira El Rio Alta because of the name. However the street itself isn’t exactly right next to the Manzanares River–maybe there was a stream there back in the day? 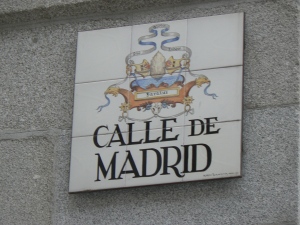 For Calle de Postas, there is a horse-drawn carriage painted onto the tiles. I’m not exactly sure what postas means–Word Reference gave me “staging post.” Spanish Wikipedia translated a “casa de postas” to a coaching inn, a place for weary travelers traveling by coach to rest for the night. Coaching inns provided accommodations for the horses as well, so I guess there may have been a coaching inn at one point on Calle de Postas. As for Calle Mayor, it is one of the main streets in downtown Madrid. Many cities around Spain usually have a Calle Mayor, which is the Spanish equivalent of the American Main Street. 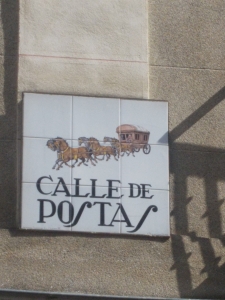 Calle de las Aguas (Street of the Waters) probably had an ornate looking fountain like the one on the street sign at one point. Calle del Almendro (Almond Tree Street) once may have had an almond tree–it may still be there for all I know but I wasn’t paying attention when I took the picture! And as for Cava Baja (Low Wine Cellar Street), this is a well-known street in the bustling La Latina neighborhood known for its lively bars and restaurants which explains the name. 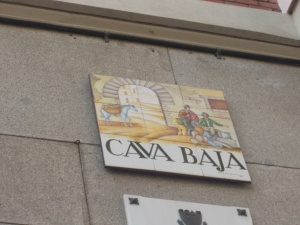 Plaza de San Nicolas  and Calle de San Nicolas are right next to the church of Saint Nicolas, one of the oldest churches in Madrid. Calle del Clavel (Carnation Street)  features a bouquet of carnations. Calle de las Amazonas (Street of the Amazons) shows two blonde women with a bow and arrow slung on their backs riding horses (I know it’s hard to make out–I seriously wonder about how this street came to be called this. Are there any records of Amazon women traipsing around Madrid?) And then we have Calle de la Almudena which is right next to Madrid’s cathedral La Almudena, who is also the patron saint of Madrid. 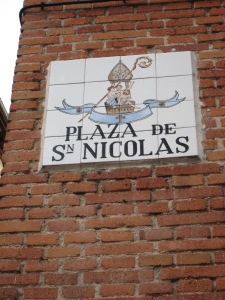 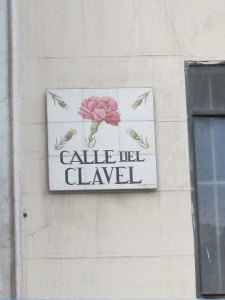 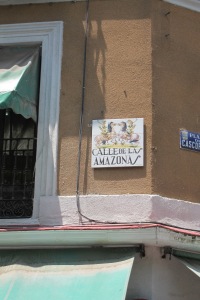 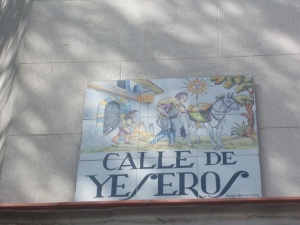 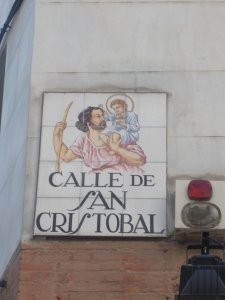 If you want to see better high res pictures of the street signs of Madrid, you must visit the website Las Calles de Madrid en azulejos, an archive of pictures of what I believe are all the hand painted tiled street signs of Madrid photographed by Gabriel Montoro. Below are two street signs I pulled from his website. Huge difference between my pictures and his! The two below are Calle de la Escalerilla de Piedra (Street of the Stone Steps) and Calle de Juan de Herrera (the architect who designed the monastery El Escorial which appears on the sign). 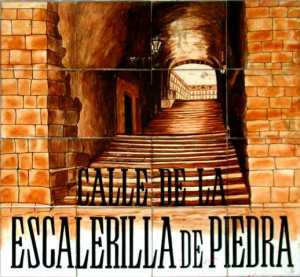 Do you know of any other cities that have turned their street signs into public works of art?