The Alcatraz of the East Coast: Inside the Walls of Eastern State Penitentiary

America’s most infamous prison is hands down Alcatraz. I visited “The Rock” about seven years ago during a family trip to California and I was just fascinated by the island’s history and how it evolved to become one of the USA’s most notorious prisons. This visit kick started a budding interest in old abandoned buildings, ones that tended to have a darker, morbid history. (Yes, I know I’m weird).

Through the reality tv show Ghost Hunters, I discovered that the East Coast harbored a prison that was even more foreboding than Alcatraz, a prison known as Eastern State Penitentiary located in the city of Philadelphia. Roll your eyes at the Ghost Hunters part–I know you want to! However, if I had never watched the show, I would never have learned about this fascinating place. I have been wanting to visit for a couple of years and I finally got the chance this past weekend when I went down to Philadelphia to visit a friend from college.

Main gate of Eastern State. Doesn’t it look like a fortress?

This is an old photo of the prison’s layout. Just based on this layout, you can already tell this is a highly unusual building. As the brochure describes it, the different cell blocks are “spread like the spokes of a wheel.” I like to think of it as a misshapen star. Or a snowflake.

Eastern State Penitentiary is actually much older than Alcatraz. It originally opened in 1829 and continuously operated for 142 years, finally closing in 1971. The prison’s model was built on a system of strict isolation, in which every single prisoner was housed in a cell that was completely enclosed with just a skylight in the ceiling, the only glimpse of natural light the inmates had access to. There were no bars on any of the cell doors–they were solid wood, which prevented inmates from interacting with one another. This extreme isolation stemmed from the belief that inmates would have time to reflect on their crimes, and that they would then become penitent–hence the word penitentiary. When inmates were moved around the prison, they were forced to wear hoods, meant to disorient them so they were unable to get an idea of what the prison layout was like (and attempt to escape). 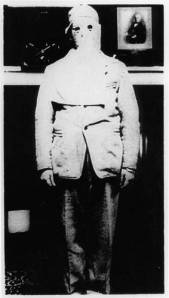 Oh and guess who was one of the proponents for this prison model?

None other than Benjamin Rush, the founder of Dickinson College, where I went for undergrad! (Benjamin Franklin was another supporter)

One of my favorite things about Eastern State is that most of the prison has been left untouched. There have been very few renovations done, apart from the Ticket Office and Gift Shop (where the old armory used to be), restrooms, and the necessary reinforcements that I suspect have been made to avoid structures collapsing on top of visitors. The place feels so authentic because it appears to be in a preserved state of decay, if that makes any sense. The penitentiary fell into ruin when it was closed and was abandoned for approximately 20 years, before opening to the public in the early 90s. Some of the cell blocks aren’t even open to the public, but you can still catch a glimpse of them through the barred doors from the central rotunda, which is where all of the cell blocks branch off of.

Through these next pictures that I took, I hope you’ll get a feeling of what I mean. Paint peeling from the walls, original furniture rotting away inside the cells, and just an overall feeling of apprehension and bleakness. Imagine solitary confinement in this kind of environment. It is also easy to see why this place has long been rumored to be haunted. 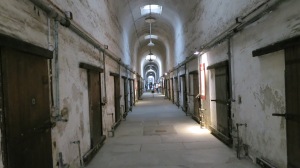 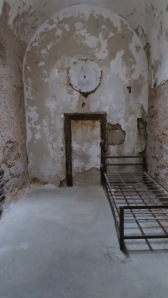 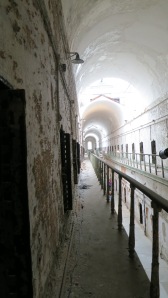 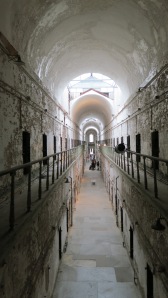 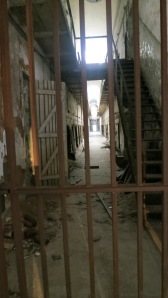 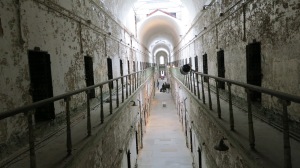 As you can see above, some of the cell blocks had two levels and catwalks, others didn’t. There were even women who were incarcerated here, but they were a small minority. The overwhelming majority were men.

One of the most infamous residents of Eastern State was, of course, Al Capone (who also did a stint at Alcatraz, guy sure got around!). He stayed there for about a year and without a doubt, his cell was one of the most luxurious. This is a mock up of what his cell used to look like. Not bad for a mob boss, eh?

In reality, a regular inmate’s cell looked like this.

In 1945, a group of 12 men escaped Eastern State via a 97 foot underground tunnel built by two inmates. The tunnel took about 13 months to complete, yet the escape for most of the convicts was short lived. All of them were eventually recaptured, some within a mere few hours after the escape (including one who rang the doorbell 8 days after the initial escape and begged to be let back in because he was hungry and had nowhere else to go!). 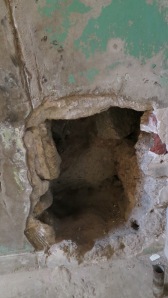 Here are a few more pictures I found through Google Images taken by LC Ferrari. I feel that he really managed to capture the haunting, eerie feeling I got while I was there. 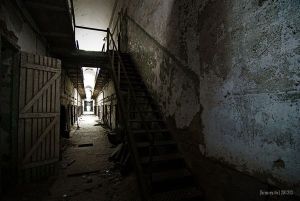 For more information about tours and all things Eastern State Penitentiary, you can visit its official website. I did the audio guide tour (included with the main admission ticket price) and I highly recommend it! The actor Steve Buscemi provides the narration.

To see where my interest in this place all started, here is the Youtube link to the episode in which the Ghost Hunters crew visits the prison for the first time.