The Life and Museum of Isabella Stewart Gardner

I know I’ve dropped off the face of the blogosphere lately but I’m back with a post about what I have decided has become my favorite museum ever–not a statement I make lightly. I don’t claim to be some kind of art connoisseur. I am not going to pretend to be a museum snob. In fact I kind of dread art museums when traveling, because I can only stare at so many paintings and sculptures before they all start to blend together. Nonetheless, I usually feel compelled to visit them due to peer pressure, since everybody else makes a big deal about them.

However,  the Isabella Stewart Gardner Museum in Boston is very different. I visited the museum for the second time in less than a year last weekend when I was in Boston. I thought the museum was incredible the first time I visited and I could not wait to go back. My initial impressions were reaffirmed during the second visit and cemented my opinion as The Best Museum Ever.

Unsurprisingly, the museum is named after its founder, Isabella Stewart Gardner.

Isabella Stewart Gardner in 1888. Courtesy of the Gardner Museum.

Back in the day, she was one of the most prominent figures of Boston high society. She was also very passionate about art–so passionate that she and her husband Jack Gardner began accumulating their own personal collection. The couple traveled quite frequently, mostly amassing pieces for their collection during their visits to Europe. However, they also traveled to the Middle East and Asia, a fact which is reflected through the works of art featured in the museum’s collection.

Isabella was an ardent fan of Italian art and culture, a fascination which no doubt stemmed from her summers in Italy as a young girl. She was especially fond of Venice, Italy–the  museum is actually built in the style of a 15th century Venetian palace and is modeled after the Palazzo Barbaro, where Isabella regularly stayed when in town.

At the end of the 19th century, Isabella and Jack decided their current home was not big enough to house all the art they had collected throughout the years. Even though Jack died in 1898, Isabella pursued their dream of building a museum to showcase their art collection to the public. She insisted the architect design the museum according to her specifications and took great care in selecting the location of each piece in her collection (so she was a bit of a control freak but the end result paid off!). I can’t imagine how long this all took, considering there are more than 2,500 works in the collection! The museum finally opened to the public in 1903 and was initially called Fenway Court. In her will, Isabella instructed she wanted the place to remain a museum and for everything to be left the way she left it after she died. And for the most part, museum staff have followed her wishes.

(Note: Photography is not allowed inside the museum so I had to resort to Google Images and as it turns out, the museum’s website has a ton of pictures of the inside of the museum).

I am not about to describe all three floors of the museum but merely highlight three of my favorites. If you wish to read more about the museum’s collection and see pictures of the different rooms, you can check out the collection overview at the museum’s website. It is very thorough and well organized.

At the heart of the museum is the courtyard, which is the first room you will pass through when you enter the museum. The courtyard definitely sets this museum apart from any other. The architecture is so reminiscent of courtyards I had seen in Spain (clearly Isabella and I would have gotten along famously were she alive today). The museum’s four flours are built around the courtyard, creating an open yet intimate setting. As you climb up to the upper floors, you can catch glimpses of the courtyard from high up, offering visitors a unique chance to view the courtyard from different angles and perspectives. I was not able to find a good picture of it (even the one on the Gardner Museum website is not great), but in the center of the courtyard is this intricate mosaic which dates from Roman times. The plantings in the courtyard also change seasonally. 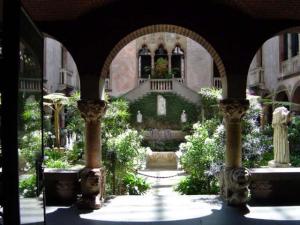 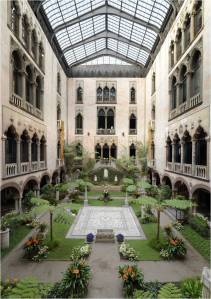 Courtesy of: Clements and Howcroft 2009 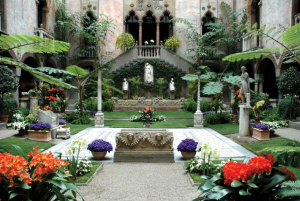 It should come as no surprise that these rooms ranked as some of my favorites, given my love for Spain. These two rooms are on the first floor, which means they branch right off the courtyard. Below is a picture of the Spanish cloister. If you have ever been to Spain, you will recognize the typical arches of the doorway and windows, along with the tiled walls.

The crown jewel of the cloister is at the end of the gallery which you can see in the first picture if you squint hard enough. The painting El Jaleo (Spanish for disorder or loud racket) by John Singer Sargent features a flamenco dancer dancing to the beat of the guitarists in the background. The painting does an incredible job of capturing the intensity and passion of flamenco.

The Spanish chapel is right next to the cloister. It is small, but it is also home to a painting by the Spanish artist Francisco de Zurbaran (which will be familiar to your ears if you have spent any amount of time in Spain). The fact that this museum even had a small space dedicated to Spanish art made me giddy and homesick for Spain.

Visitors are not even permitted to step into this room, yet they are allowed to peek in from two different doorways (since it is impossible to see the full scope of the room from one vantage point). This room reminded me of a salon in a European palace and was just so light and airy. A lot of the museum’s rooms are dark with the windows covered up to preserve the art, but this one was very bright. Imagine drinking tea with friends back in the day while somebody played the harp (which is actually one of the major reasons I liked this room, you don’t see harps just casually lying around someone’s house!).

This room was not one of my top favorites, though I did like it, especially the rose window which you can see in the picture below. What is really interesting about it is the portrait of Isabella Stewart Gardner lurking in the far corner. See the gold frame?

The above portrait of Isabella was painted by John Singer Sargent (yup, same guy who painted the flamenco one) in 1888 and caused quite the scandal when it was unveiled. You see, Isabella was showing quite a lot of skin for the 19th century and her husband was less than thrilled when he saw the painting for the first time. Add to the fact that Isabella was painted in the style of a religious icon–notice the golden background and halo around her head? And well, it was rather controversial to represent oneself as a saint in a portrait back then. Isabella’s husband requested it never be shown in public again and the Gothic Room remained off limits to visitors while Isabella was alive. Instead, the room became a studio for John Singer Sargent, who remained a lifelong friend of Isabella’s.

From these few pictures, it is plain to see Isabella’s art collection is very eclectic. She did not restrict herself to one style of art and she collected just about everything under the sun–paintings, furniture, books (what I would have given to open one of the book cases and actually open one of the books), letters written by famous historical figures (such as Marie-Antoinette!!!!), mosaics, statues, etc. And all her treasures came from many different time periods, so there is something for everyone who visits the museum. If you ever find yourself in Boston, make it a point to visit (plus it’s right down the road from the Museum of Fine Arts)!

Fun fact: if your name is Isabella, you get in for free! For more information about visiting hours and admission, go here.

(I wanted to also include the infamous 1990 robbery at the museum which included stolen works by Rembrandt, Vermeer, and Degas but this post is long enough! For the complete story, here is a link to a New York Times article describing it).