Fine, I’ll admit it. I’m a bad American. I’m terribly unpatriotic when it comes to my country’s sports, especially baseball. I don’t give two hoots about baseball which, for some enigmatic reason, has been christened “America’s national pastime.” I don’t know who coined that silly phrase, but whoever did clearly never paid attention to something called the Superbowl’s ratings (which, if there are any non-Americans reading this, is the American football championship game and is the most watched live television event in the USA).

However, there is an exception to every rule and that exception for me is the Boston Red Sox baseball team. Before the New York Yankees and Mets fans come running at me with their pitchforks, let’s get one thing very clear: I do not follow baseball at all. I do not know any of the Red Sox players by name, I do not own any Red Sox memorabilia, and I have never been to a Red Sox game (though I would like change that in the future to visit the historic Fenway Park baseball stadium).

Despite not being a sports fan, when I learned I would be in Boston the same weekend as the Boston Red Sox World Series Victory Parade, it was not even a question whether I would go (for some odd reason, we also call the baseball championship game the World Series even though the USA is the only country to participate). When I learned that the victory parade would feature the players riding the iconic Boston Duck Boats, I was pretty much like “HELL YES.”

This is one of the Duck Boats which carried the Red Sox players and their families. Visitors to Boston can ride them for a historical tour of the city.

Did I happen to mention that the Duck Boats are World War II retrofitted “amphibious vehicles” that are technically cars (so they roll around on land) and boats (so they go into the water as well) at the same time? Just like a duck! Hence the name. Um, yeah. Coolest thing ever. And apart from the historical tours, Boston uses them for victory parades when their teams win important championships. 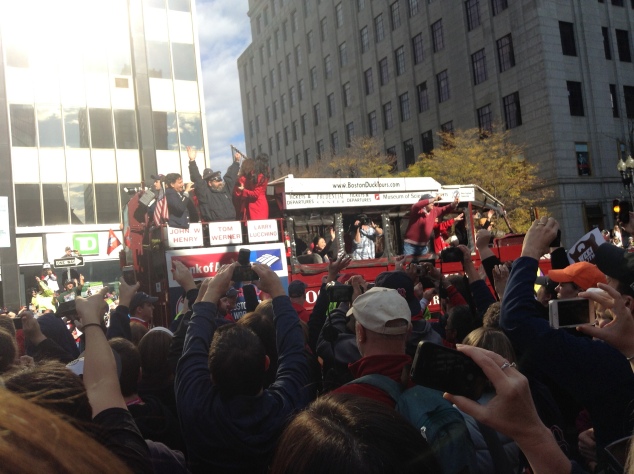 I originally intended to visit Boston to spend time with my friend Mimi from college. She is part of the Red Sox Nation (term referring to the collective entity of Red Sox fans) and asked me whether I’d be interested in going. I was already sold as soon as I knew the Duck Boats were involved, so despite not being part of Red Sox Nation or a baseball enthusiast, I agreed right away.

Mimi and I wandered over to Copley Square, one of Boston’s main downtown squares, to find a spot along Boylston Street so we could watch the parade. It was such a beautiful day and was fairly warm, despite the fact it was fall. Everybody around us sported some kind of Red Sox apparel: baseball hats, sweatshirts, jackets, etc. Our Red Sox gear was conspicuously absent, but nobody seemed to care. Everybody around us was smiling, snapping pictures, craning for a look at the first Duck Boat.

The next two pictures show the crowd waiting in anticipation for the Duck Boats: 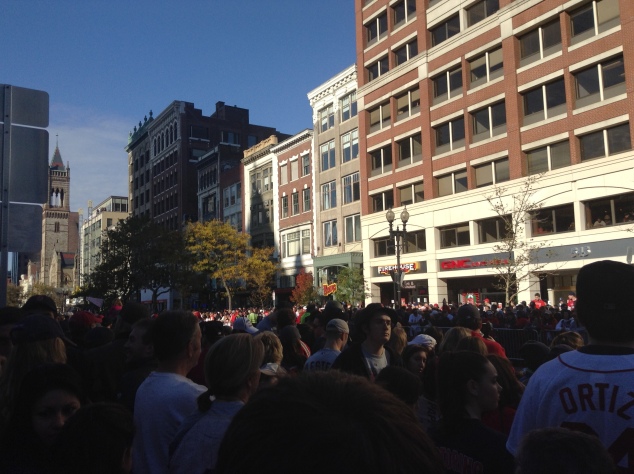 This was also the first time the Red Sox had won the World Series on their home turf since 1918 (they had previously won in 2004 and 2007 but both those games were played outside of Boston), so of course just about all of New England was in attendance.

The atmosphere was so festive and celebratory. I had known that Red Sox Nation was a dedicated bunch, but this parade was the first time I really got to see that passion on display. In my opinion, I do not know a baseball team that is as beloved to its fans as the Boston Red Sox. The fans get very emotional about the team’s wins and losses. And the parade was very emotional this year, especially in the wake of the Boston Marathon bombings  in April which occurred only feet away from where Mimi and I watched the parade. Winning a World Series is quite the feat, but just by looking around, I could tell this World Series was about way more than that.

To me, this World Series victory was about hope, endurance, and the ability to overcome tragedy, which was evident by the catchphrase that emerged after the bombings: Boston Strong. The Red Sox have historically been underdogs (thanks to the  infamous urban legend of the Babe Ruth curse) and this win was a way for Boston to announce to the world, “We are still here. And we still got it.” 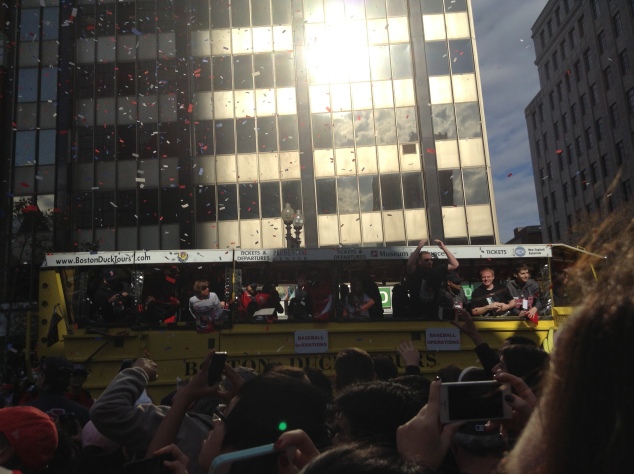 There was also confetti flying around so Boston totally still got it. 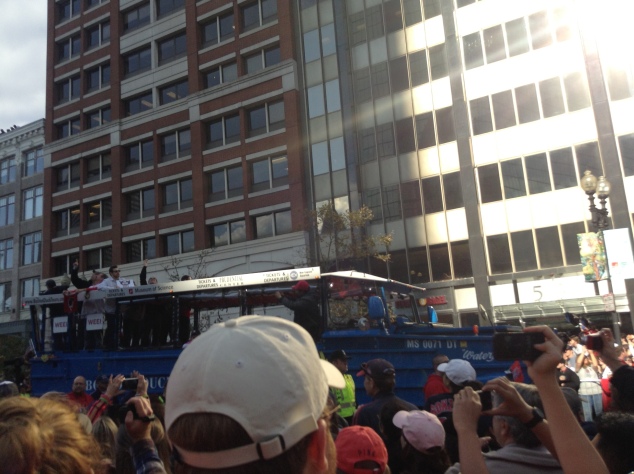 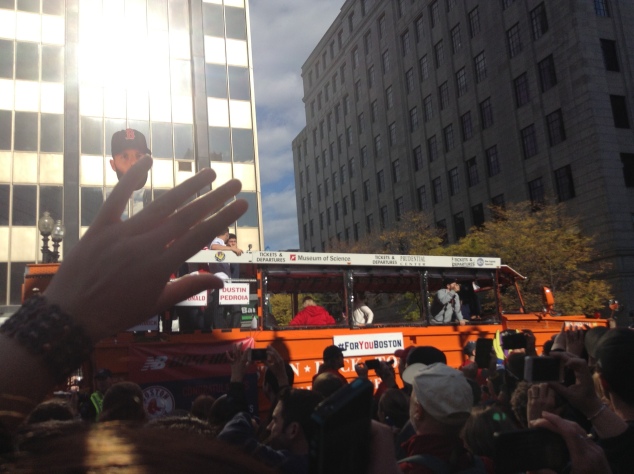 Mimi’s hand wandered into the frame while she waved to the Duck Boats.

All the confetti flying in the air!

And here is the official Boston Red Sox shoe? Looks like a big red Converse to me.

After the parade was over, the crowd more or less peacefully dispersed. I was so surprised at how civilized the whole thing was, considering this was the first time the Red Sox had won the World Series in Boston in 95 years. I would have at least expected a burning car or two, maybe even a few broken windows, or some firecrackers. Nothing at all of the sort. 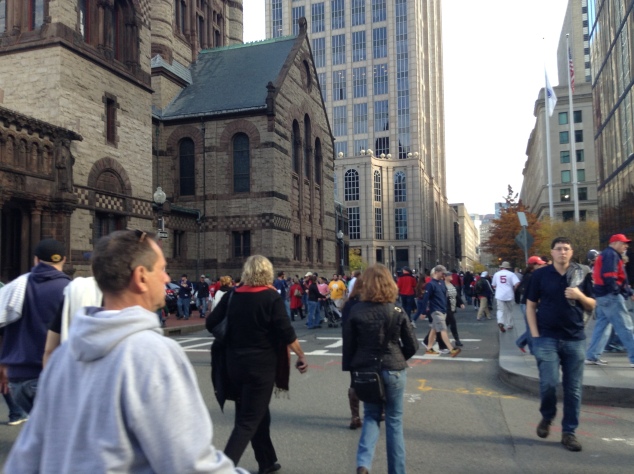 Crowd dispersing after the Duck Boat parade. To the left is the historic Trinity Church in Copley Square.

The Hancock Tower overlooking Copley Square where we watched the parade. I believe it is the tallest building in Boston.

I know I’m a native New Yorker and by default, I’m supposed to support the New York Yankees or the New York Mets. But if the Red Sox Nation ever has another victory parade, I will be there in a heartbeat.