If you have been reading my blog for awhile, you know that I am a huge fan of the city of Boston. Whenever I’m in town, I’m always looking for something new to explore. For such a small city that only covers a distance of 48 square miles, there sure seems to be a lot to do and see! As a native “upstate” New Yorker I am supposed to revere New York City (which in comparison spans a distance of 300 square miles) as the Holy Grail of cities but I think New York’s sheer monstrous size and the fact that there are just way too many people are what put me off. I do love NYC in my own way, but I think I may just love Boston more.

I know that is tantamount to sacrilege in the eyes of the true-bred New Yorkers but… the truth is the truth. This is where I insert the juvenile but thoroughly appropriate hashtag #SorryImnotSorry. (I wish I had known this expression as a teenager. I would have used it all the time and able to get away with it. Now it just makes me sound like an entitled brat.)

After seeing the Red Sox World Series Victory parade with Duck Boats, my friend Mimi and I decided not to waste such a beautiful day indoors so we hopped on the T (the local nickname for the Boston subway) and headed southwest towards the Boston suburbs to the Arnold Arboretum. The Arboretum is a National Historic Landmark and was designed and planned by a guy named Frederick Law Olmstead back in 1872. Apparently this guy was one of the key figures in the history of American landscape architecture and he went on to design several more parks around the country (including participating in the design of Central Park and Prospect Park in New York City) which are still open and operating today.

At the top of a hill in the Arboretum.

The Arboretum spans 281 acres and is actively used by scientists in the study of plant research, most notably by Harvard University which acts as part owner of the park. Mimi and I spent about two hours strolling around exploring the Arboretum. We were there right at the peak of the brilliant fall colors before all the leaves fell and left the trees bare. There were so many people just like us taking a walk, biking, running, or just sitting on a bench and chatting with a friend. We actually stopped by a bench with two older gentlemen asking them where the main entrance was but they didn’t seem to understand the question too well. We think they were two Russian grandpas–apparently Boston has a sizable Russian community, but I really can’t speak to that since I am completely unfamiliar with Boston demographics.

Such vivid colors, don’t you agree? 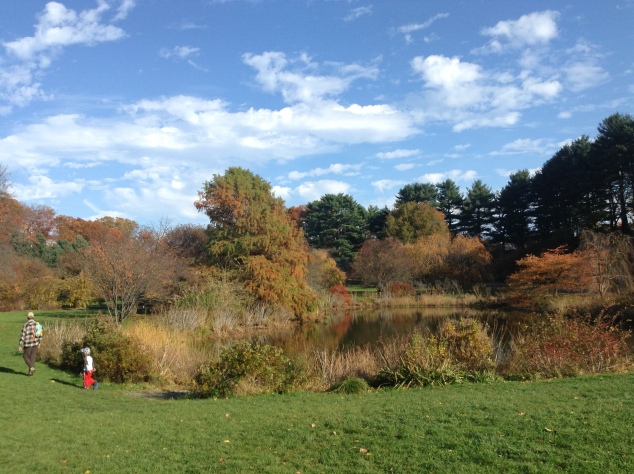 Certain parts of the park really made you feel like you were out in the woods, but then you would get a view of high rise buildings peaking out behind the trees, reminding you civilization was still present but just out of sight. 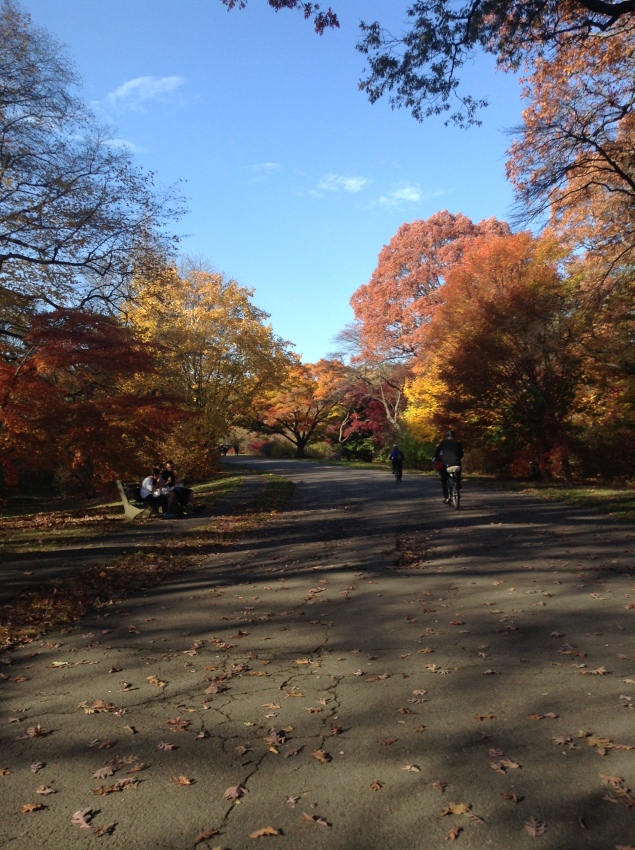 How to get to the Arnold Arboretum using public transportation: Take the MBTA (colloquially known as the T) orange line all the way to the last stop going south called Forest Hills. Once you get off the T, follow the signs in the station marked “Arnold Arboretum” and exit that way. Once outside of the station, you will see a hill directly opposite from where you are standing. Walk up that hill and you will find yourself walking parallel to the Arboretum and you will eventually see an entrance.

Mimi and I actually got kind of lost looking for an official entrance since we followed the confusing advice of two locals and entered the Arboretum through a random footpath in a residential neighborhood. Even if you do get a little lost, the Arboretum is pretty much the only thing there and it will be pretty obvious if you somehow just wander into it.