Conquering the Snow in Vermont

In Game of Thrones, several characters roam around a lot in the snowy wilderness north of the Wall, but it’s all mostly doom and gloom about how cold it is with with some occasional fights and zombie creatures called White Walkers thrown in for good measure. This is kind of how I feel about New York’s North Country–it has its limited charms like the Wall in the North of Westeros but apart from the Adirondacks, there is this kind of ramshackle, rundown appearance (like the forts along the Wall) that just seems to linger throughout most of the area. Obviously this is just my opinion, but it is not a place I would think to go unless I had an obligation (like a wedding). 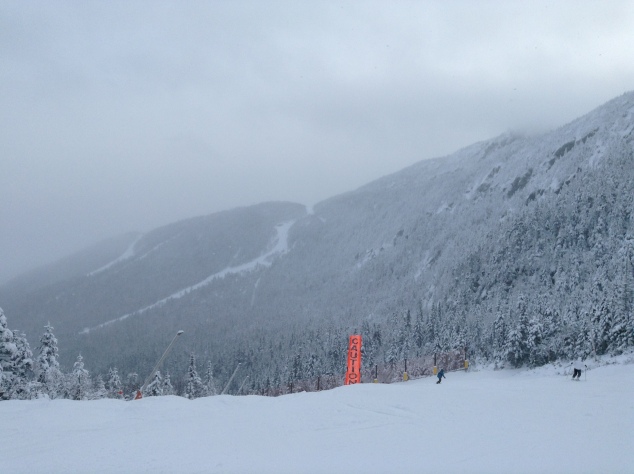 On the other hand, in my opinion Vermont’s North Country is a totally different universe.  And yes I know, technically there is no place in Vermont called the North Country but it sounds rather poetic. Everything about the Green Mountain State (the literal translation of Vermont in English from French) is kind of hipster sounding–home to the headquarters of world famous Ben & Jerry’s ice cream, the final resting place of the Von Trapp Family in Stowe (you can stay at their hotel at the Von Trapp Family Lodge), the site of the prolific Vermont Teddy Bear Factory, not to mention there is some of the best skiing in the country to be found and it is supposedly the state with the most breweries per capita (which I learned on a paper menu at the Vermont Pub & Brewery in Burlington)! Who knew Vermont was known for its abundance of beer?

Our  mountain of choice this year was Stowe, one of our usual skiing haunts that we have been going to for years. We skied two days and while the first day was incredibly cold, the second day was less windy and there was hardly anybody on the mountain. My dad and I felt like we had the whole place to ourselves. 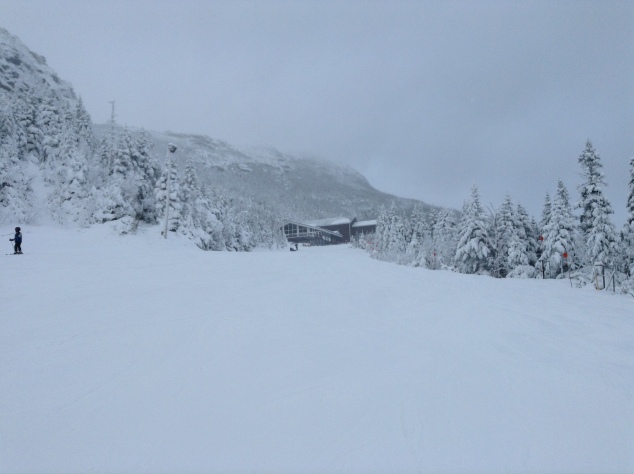 This is the part of the trail that is so flat that you need to walk with your skis pointed outward and push hard with your poles. I call it the skiing duck walk.

One of my favorite trails at Stowe is called Toll Road. Spanning a distance of nearly four miles, it is the longest easy green level trail I’ve  encountered out of all the mountains I have ever skied at. About halfway down Toll Road sits a small chapel on the side of the trail. It is appropriately called the Mountain Chapel and holds services every Sunday at 2 PM. I can’t imagine many people actually attend considering it is so out of the way and looks really small from the outside. Not to mention it is only accessible by ski or snowboard during the winter months.

I don’t know the story behind this chapel–why it was built there, who decided to build it, if people actually attend the Sunday services regularly. It’s been there as long as we have been going to ski in Stowe which is about 15 years. I noticed it had received a fresh coat of red paint since the last time we had seen it. It also seems to be quite the fairy-tale setting for a summer wedding if this wedding album is any indication. 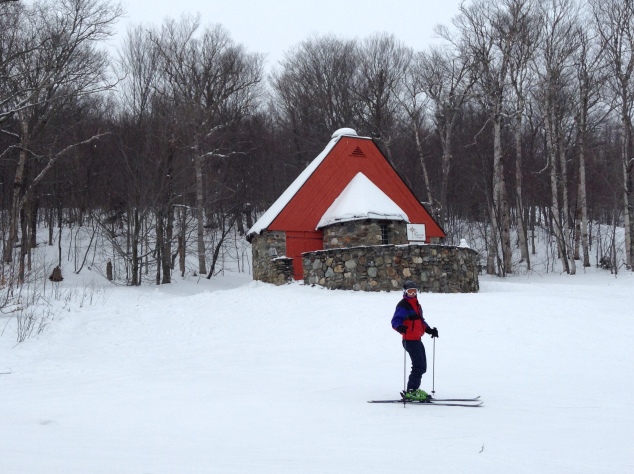 Papa posing with the Mountain Chapel.

On our third day in Vermont, we took a break from skiing and asked the hotel about any nearby hiking trails. I will admit I was a bit (okay very) put out about not going skiing for a third day. Only my parents would think of going hiking when it is several degrees below zero. I was not happy about it but I tagged along anyway as we headed toward Indian Brook Reservoir per our hotel’s recommendation. We opted to take the loop trail around the reservoir–it was not easy hiking when you added in the fact we were hiking in the snow the entire time. I will reluctantly admit the landscape around us was stunning and I wasn’t too cold since I was spending all my energy trying to put one foot in front of the other in the snow. 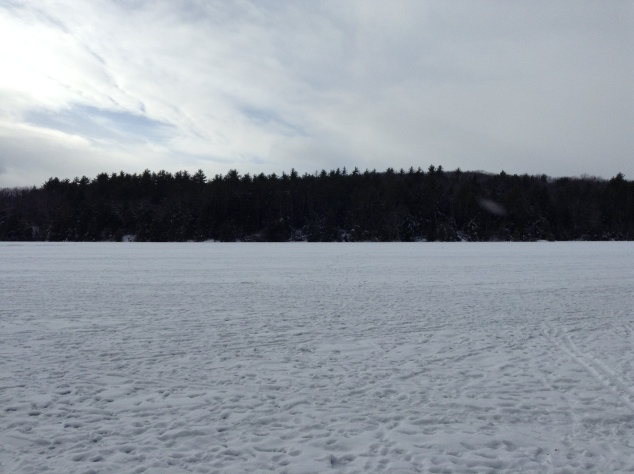 Where is the reservoir? Buried underneath the ice! The entire thing was frozen solid. 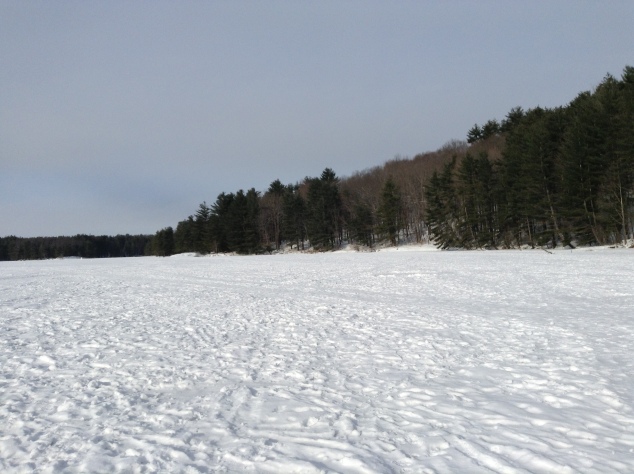 The trail nearly disappeared here, it was a little hard to figure out sometimes where to go in the snow. 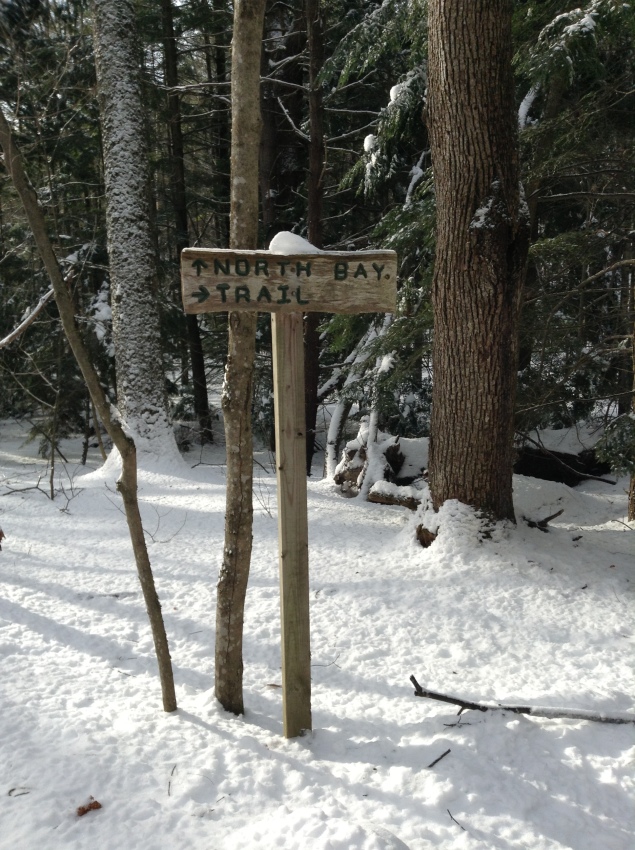 When I looked up what this place looks like in summer on Google, I couldn’t recognize it! It was hard to reconcile this white world with the greenery of summer. While I did enjoy this place under the white blanket of snow, it definitely looks a lot more inviting and picturesque in summer. 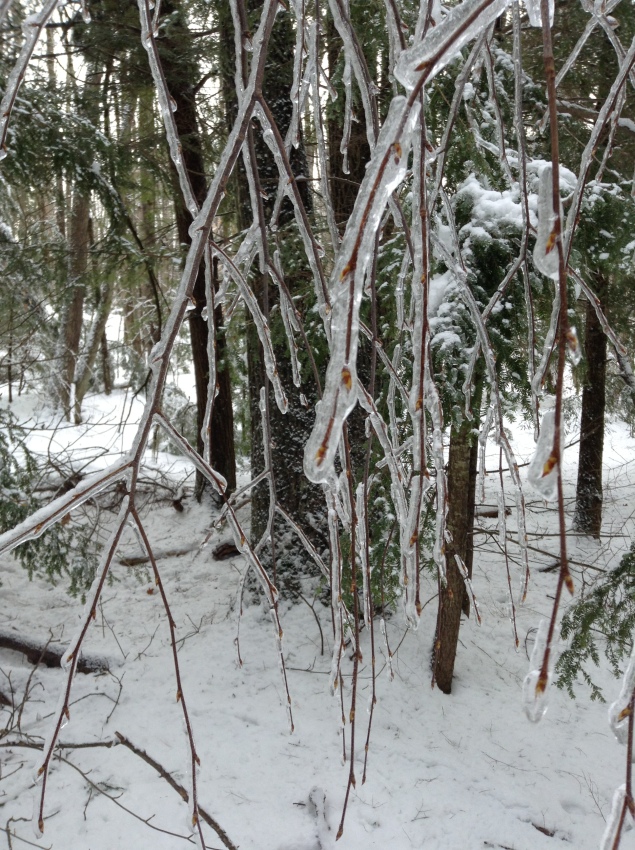 Icicles on the trees.

All bundled up in my incredibly fashionable bright pink LL Bean coat.

While Vermont gets just as much snow as the North Country in New York, I don’t think I’d mind living up here year-round as much. I hate to rag so much on poor Upstate New York but I’ve traveled just as much up there as I have in Vermont and I just happen to like Vermont better. It is as simple as that.