Living the Life of a Bachelor Stallion

Did you know that wild horses have a hierarchy, kind of like a pack of wolves or a pride of lions? Since horses are a traditionally domesticated species, it never crossed my mind to consider how their wild counterparts might behave. You see horses on farms or on ranches in paddocks grazing together like one big happy family. So what happens when they are left to their own devices? As it turns out, horses will establish their own pecking order in a herd. Observing the dynamics of this type of equine behavior is not something people get to experience every day and this was one of the major reasons why I wanted to visit the Pryor Mountains this past summer.

Before I get to the members of the Pryor Mustang herd that I really want to talk about in this post which are the bachelor stallions, some background is necessary to understand how the herd is structured. Unsurprisingly, the stallions (adult male horses) are the ones that mostly run the show. Each group of horses (called a band) within the herd consists of one stallion who presides over a group of mares (female adult horses). The number of mares in a band varies, from as low as one mare to as many as seven or eight, depending on how ambitious the stallion is. The more mares a stallion acquires, the more time he spends trying to keep them in line and warding off rival stallions’ attempts at stealing his mares.

The bands usually contain a few foals (baby horses), products from the previous spring’s breeding season. Foals typically nurse their mothers for up to a year and will stay with their childhood band for up to two or three years before the band stallion kicks them out or they get stolen by another band stallion.It may sound cruel, but once a colt (male baby horse) reaches maturity, his hormones will kick in and he will start to take a natural interest in his father’s mares, meaning he will start vying for the mares’ attention and thereby challenge his father’s authority over the band. To get rid of the competition, stallions periodically chase off their colts in order to retain their lordship over their harem. 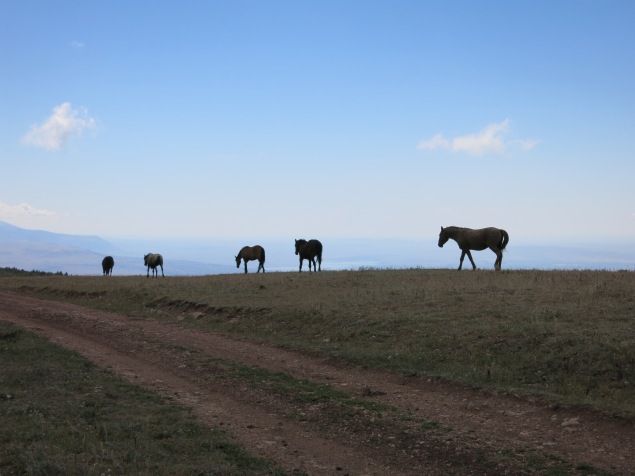 Gringo’s Band. Left to right: Galadrial, Beulah, Ketchikan, Gringo (the band stallion) and Tecumseh (another stallion who I believe lost his band to Gringo but Sandy would need to confirm).

When the colts are expelled by their fathers from their bands, they become bachelor stallions. And that means exactly what it sounds like–carefree young boys on the cusp of manhood running around together and rolling around in the mud, occasionally engaging in play fighting to hone their skills for the day they attempt to challenge a stallion and take a band of their own. As they get older, they will start to dog the older band stallions and follow them around, threatening their leadership as they assert their dominance.

During my three days in the Pryors, we got to witness some of these bachelor stallions in action and directly interact with them when Jasper, Moorcroft, and Micah decided to stand right in the middle of the road, blocking the way. Sandy could not drive around them in her big truck without running the risk of spooking them. The only thing to do was to wait for them to move so we sat in the truck and looked at them. Jackson peered at us curiously while Moorcroft and Micah waved their tails at us, seemingly unperturbed they were standing in the path of Sandy’s enormous truck. From their relaxed stance, I could tell they were perfectly content to stay where they were and had no intention of moving anytime soon. 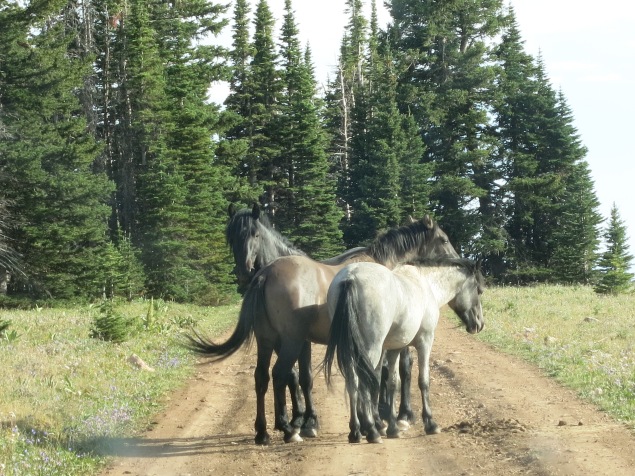 When we first spotted them, they were standing–where else?–in the middle of the road in a different area from the picture above. You can see the fence in the background which prevents the horses from being able to roam farther out on the range. The installation of the fence by the Bureau of Land Management, the organization which manages the herd, has become a point of contention among the Pryor Mustang devotees because it reduces the amount of land available to the horses.

The bachelor stallions finally deemed we were worthy to pass after some prodding on our end. Once they grudgingly moved out of harm’s way, Moorcroft and Jasper somehow trapped Micah in between them as they proceeded to nuzzle each other. It was really interesting to see how Moorcroft and Micah, the two younger bachelor stallions, deferred to Jasper, the oldest of the three. At about five years of age (correct me if I’m wrong Sandy!), Jackson is the most experienced bachelor stallion, having been on his own longer than Micah and Moorcroft. 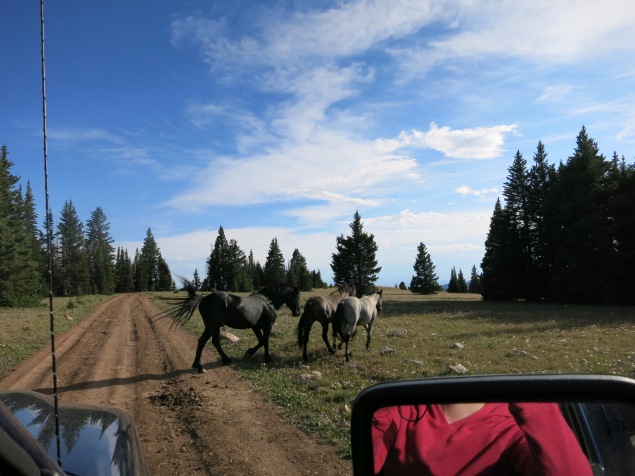 In fact, I was surprised that Jasper did not have his own band yet. He seemed so confident and fearless as he led Moorcroft and Micah around, showing them the ropes of bachelor stallion-hood. It is possible he may have tried to challenge a band stallion in the past and just has not been successful (any insight on this Sandy?). But he is definitely ready, it’s only a matter of time before someone spots him with his own band. I am really looking forward to how that will play out for Jasper. Who will he challenge? What mares will he end up with?

I’m a stallion, hear me neigh! Such a handsome horse.

The younguns trailing behind. Left to right: Moorcroft, Micah. Everybody on the tour was a huge fan of Micah’s coloring.

Jasper leading the way as Moorcroft and Micah follow close behind.

I wanted to pose with the three stooges in the background. I swear they knew I was trying to get a picture, because right as Julia took it the three of them ran behind the trees.

I thought the bachelor stallions were the most fun to watch. They have no responsibilities for the time being, except for training for their future as band stallions (which in retrospect is a major responsibility I suppose). They have no rival stallions to keep an eye out for, they have no mares and foals to constantly stand guard over, and they do not need to worry about colts possibly usurping their role as head honcho of the band. They lead a less complicated existence and are granted a certain freedom that the rest of the herd does not get to experience. Of course, “less complicated” is all relative. Life is tough living high up in the mountains on the range but these mustangs are hardy animals and somehow manage to make it work.