Things that go bump in the night or rather faces that appear randomly all over your house.

Halloween is officially over this year but it’s still “Dia de los Muertos” in South America or All Saints’ Day, whichever you prefer so this post isn’t all that late. Halloween is hugely popular in North America. I grew up dressing up in different costumes each year and going trick or treating with my sister around the neighborhood collecting candy. I loved dressing up but I stopped around high school which is I think when most kids stop trick or treating. I don’t miss the dressing up so much though it was fun at the time–I do miss decorating the front of my house and carving pumpkins though which are virtually impossible to find in Spain.

In the last decade or so, Halloween has become increasingly popular in Europe, mostly thanks to American television and movies. The holiday has more or less made some kind of impact here in Spain–mostly young people dress up and go to costume parties. Little kids dress up and I assume in some neighborhoods there is some trick or treating. Friday we “celebrated” Halloween at the school. The preschool and elementary kids dressed up and did some Halloween arts and crafts which were rather creative, I have to admit. But then it degenerated into chaos in the elementary school as the kids were allowed to run amok in the hallways–it was literally a free for all. I didn’t enjoy that at all but that is a story for another day.

Anyways, an important component of celebrating Halloween are ghost stories. Typically, all cultures have popular ghost stories and legends that are retold and passed down through generations. A couple of months back, I remember talking about American ghost stories with my intercambio Miguel and telling him about the infamous Amityville haunting (which people have said to be a hoax but that’s not the point here) and the rather bizarre story behind the Winchester Mystery House out in California. In case you are unfamiliar with the legend behind this house: http://en.wikipedia.org/wiki/Winchester_Mystery_House )

After describing a few of the most famous American ghost stories I could think of, I then asked Miguel to tell me if there were any similar stories in Spain. While I am rather wary of the paranormal and I go back and forth on whether I believe in ghosts or not, I do love a good story and I am always on the hunt for a good book to read. And this is when I first learned about “Las Caras de Belmez” or as it’s known in English, “the faces of Belmez”–and according to some parapsychologists one of the most important paranormal events of the 20th century.

On August 23rd, 1971, in the town of Belmez de la Moraleda located in the province of Jaen in Andalusia, homeowner Maria Gomez Camara claimed she noticed a human face spontaneously appearing on her kitchen floor. Maria’s husband and her son destroyed the image and put down new cement in the kitchen. However, a few days later the image came back. At this point, the mayor intervened and ordered the removal of the cement with the human face so it could be analyzed. At some point, human remains were found below the kitchen floor and it seems the house may or may not have been built atop a former cemetery.  At any rate, the human remains were buried elsewhere but that didn’t stop new faces from appearing in he house.

The house became famous as new faces appeared. And this is where it gets weird: some faces appeared, others disappeared, some evolved over time, and some entirely switched locations in the face. Obviously many people became curious about this bizarre story and tourists flocked to the town just to see the faces. Maria and her family even began charging people to see them.

Various people have investigated and have analyzed the faces and there have been several theories as to how the faces could have been painted on and all that jazz. It would make sense to suspect the faces are easily forged but the believers purport that the homeowner Maria Gomez somehow possessed powers of “thoughtography” which is apparently the ability to burn images from one’s mind onto surfaces. Maria Gomez died in 2004 and since then, the house has been mostly closed to the public. Some other psychic lived in the house for awhile after and allegedly discovered “new” faces in the house but those were later proved to be fake.

Miguel admitted he had never bothered googling information about the story because the whole phenomenon freaks him out too much. It freaks me out too but I’m too curious for my own good so yes, I google imaged “Caras de Belmez” and have included some of the faces that appeared in the house for your viewing pleasure. 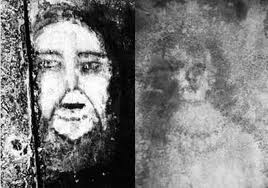 I would classify this as majorly freaky.

example of a face “evolving”

So glad I do not live in this house.

this one appears to be having a bad hair day.

Hoax or not, the whole story is rather fascinating. Why would someone even bother pretending to have faces appearing all over his or her house for 30+ years? Unfortunately, that’s a mystery we will never fully solve because it looks like Maria Gomez took that secret with her to the grave.