Welcome to the San Francisco of Europe: Lisbon

It’s been awhile since I last updated and I apologize! I went back to New York for the holidays and got distracted being home with family and seeing friends. Then I came back to Madrid and went straight back to work. I promise I WILL write a post about the job/being an English teacher assistant. I even have a lot of it written out–however it’s rather long and I’m going need to heavily edit it for content and length’s sake.

In the meantime, I can dazzle you all with these pictures I took when I went to Portugal in the beginning of December. I can’t believe it took me so long to get there, especially after being in Spain for so long. Spain is a decent size and there is enough to visit and see here. It’s easy to get wrapped up in Spain and forget there is another country in the Iberian Peninsula. Also shame on me for believing “Oh Portugal is just like Spain but they just speak Portuguese there.” Blame it on American ignorance if you will. In fact, Portugal is nothing like Spain. Here are some brief contrasts:

As you can tell by these following pictures, the weather rather sucked on our first day. It was chilly and very foggy, but despite the weather, it is easy to see Lisbon, the capital of Portugal (and fun fact the largest westernmost city in Europe), is a very beautiful city. It is located along the Tagus River, right at the mouth of the river very close to the Atlantic Ocean. It is also one of the oldest cities–older than London, Paris, or Rome. It obviously wasn’t always called Lisbon but it’s always been an important location for various civilizations–the Germanic tribes, the Moors, the Romans, and more recently the Christians.

As you can tell by the following pictures, I was obsessed with the tiles on these buildings. However, one thing to notice in these pictures is that you can tell some of these buildings are run-down, dilapidated, and abandoned. I think that has a lot to with Portugal’s economy right now. These are beautiful buildings, but due to lack of money, they are currently wasting away which is sad to see. 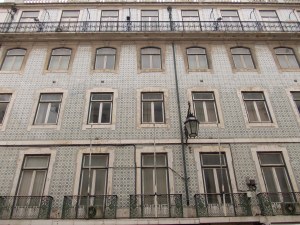 Traditional buildings with tiles on the facades 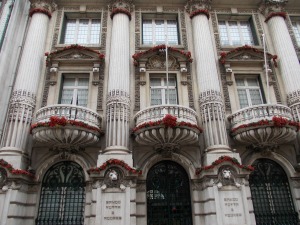 I think this is the National Bank of Portugal… it’s pretty! 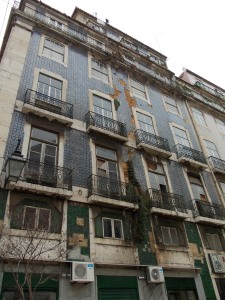 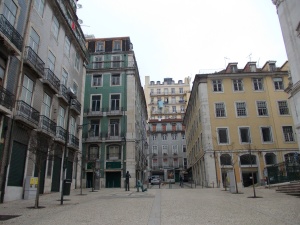 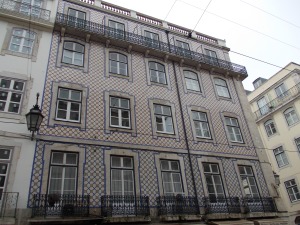 We got some fantastic views of the city from the Elevador de Santa Justa, this old school elevator/lift in downtown Lisbon built sometime in the late 1800s. Now mostly a tourist attraction, it was built to connect two different neighborhoods in Lisbon. The city is very hilly and the city leaders thought this would be a good way to help Lisboners get around without having to walk up steep hills all the time. 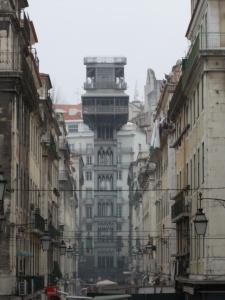 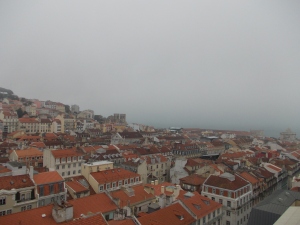 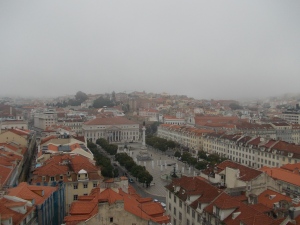 one of Lisbon’s main squares 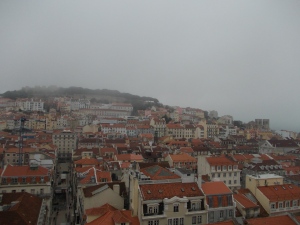 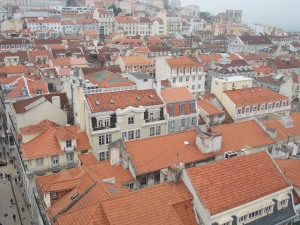 the red tiled roofs reminded me of Toulouse

Here are some random squares we wandered around in while in Lisbon: 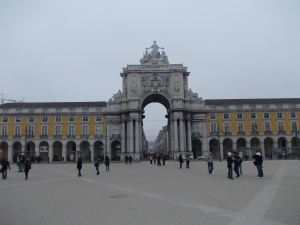 Praca do Comercio down by the Tagus River 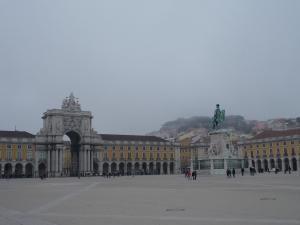 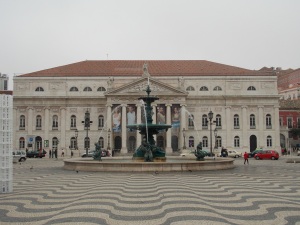 I mentioned above that Lisbon is very similar to San Francisco in many ways. This is why:

Apart from trams, one of the ways Lisbon compensates for its steep hills are the numerous staircases squeezed between its buildings. This makes for quite the work out. We had to climb up one of these staircases every night to get to our hostel–not fun! 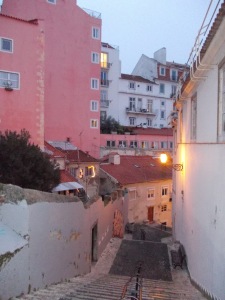 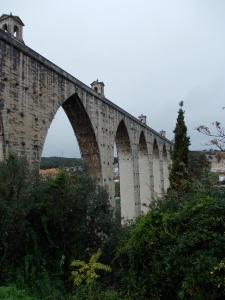 On our last day, it was rather rainy in the morning, but it cleared up in the afternoon. Blue skies really make all the difference in pictures. The two last things we tried to visit were the San Jeronimos monastery and the Torre de Belem, two UNESCO World Heritage sites. I was able to sneak into the Torre de Belem (I was the last person they let in before it closed) but we sadly did not have time to visit the monastery. 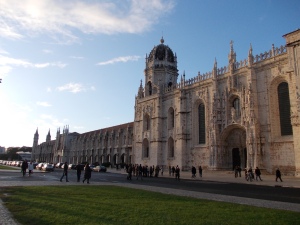 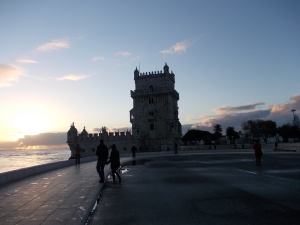 Also, like I mentioned, there are a million pastry shops in Lisbon. My traveling companions and I took advantage of this and tried many pastries, such as this one: 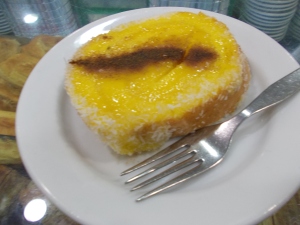 Not included in this post is our day trip to Sintra. I will cover that in another post.

So, in conclusion, Lisbon is absolutely gorgeous. Nothing like Spain. In fact, I think it is safe to say it is distinctively Portuguese.