Semana Santa Series part 5: the time I nearly walked my feet off in Munich, Germany

After visiting Nymphenburg Palace, I headed back towards Munich’s city center to explore. In the morning, it had been overcast but the sky cleared up in the afternoon. I headed down the main shopping street past a bunch of clothing stores (including a Promod store that was 4 floors! I may just have to devote an entire post to this store because this year I have become such an addict) and first stopped at the Frauenkirche, Munich’s cathedral.

I was actually surprised to discover this church is considered a cathedral–it seems kind of small to be called that. Nevertheless, this church is one of the most recognizable landmarks in Munich. What is unusual about it is that it is made out of bricks! I feel like most cathedrals I visit tend to be made out of stone. When you enter the cathedral, you can’t see any of the windows because of the thickness of the high columns on either side–they hide the windows and you don’t see them until you fully enter through the nave. 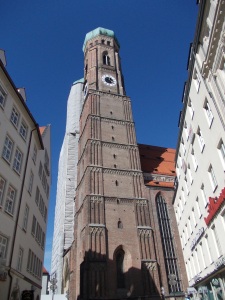 Devil’s Footprint according to local legend

model of the cathedral–what it looks like without scaffolding!

The no windows optical illusion is also connected to this footprint on the floor in the cathedral’s entrance–it’s called the devil’s footprint. According to a legend, the devil came to visit the cathedral and he thought the builders had been foolish because they had forgotten to include windows. From his vantage point in the entrance, he couldn’t see the windows. When he tried to enter the cathedral, he found he couldn’t because there were actually windows. So then he got mad and stamped his foot, leaving behind his footprint. Or something like that, I don’t really understand the legend very well.

I was told by my friend Mimi to climb up the tower to get a view of the Munich cityscape but as you can see from the pictures, one of the towers is covered by scaffolding and is being restored. So for the time being, the tower is closed.

I then made my way into Marienplatz, Munich’s main central square. Back in the Middle Ages, markets and tournaments were held there. Today it is the site of the Neues Rathaus (New City Hall) and the famous Glockenspiel. This clock puts on a show at 11 am (and 12 pm and 5 pm May through October). Not only do the 43 bells ring at those times, but the 32 figurines move and dance to the delight of tourists. The top level of the Glockenspiel reenacts the wedding of a German noble couple and the bottom half features twirling barrel makers. According to a myth, there was a plague in Munich in 1517 and these men danced in the streets to keep the spirits up of the Muncheners. I don’t have a great camera so I was unable to get good pictures of the figurines. So I added a videoclip I found from Youtube of the figurines moving to give you an idea of what I got to experience.

Neues Rathaus and the Glockenspiel 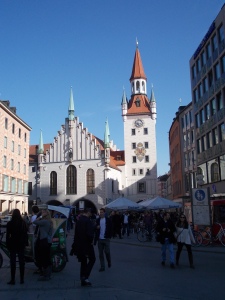 After the Glockenspiel show, I briefly entered the New City Hall’s courtyard, meandered to a nearby food market, and went up Peterskirche tower to get a view of the city. Unfortunately, there was a mass going on inside St. Peter’s Church so I wasn’t able to go in that day. 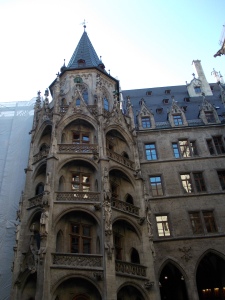 In the New City Hall courtyard 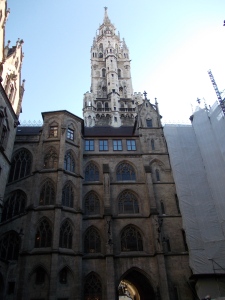 back of the Glockenspiel 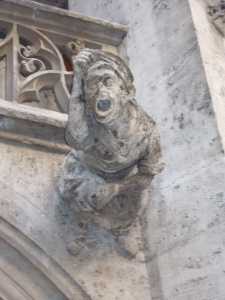 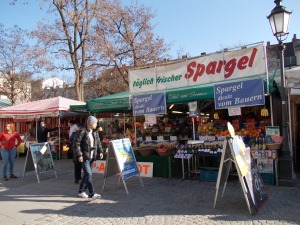 I freaked out a little over the cheese stand.

the view from the tower of St. Peter’s church

As you can tell, the city center of Munich is dominated by low white building and red tiled roofs. I think there are building ordinances banning the construction of tall buildings. Frauenkirche is one of the tallest structures in the city.

Neues Rathaus in its entirety and Marienplatz

I then walked past some more famous buildings and ventured into the Englischer Garten, Munich’s version of Central Park. Needless to say, I was exhausted by the end of the day and ended up taking the tram back to the main train station which was near our hostel.  At that point I could no longer feel my feet. 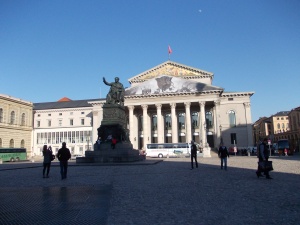 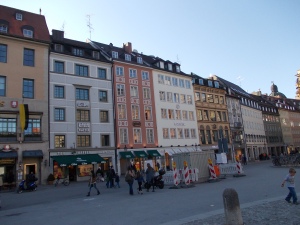 This was my favorite church in Munich, possibly my favorite of the entire trip. I loved the vibrant yellow–it’s not often you see a church in a such a cheery, bright color. The inside was just as beautiful. 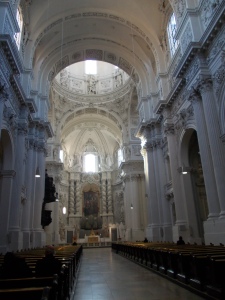 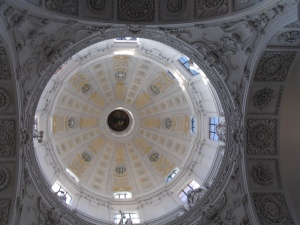 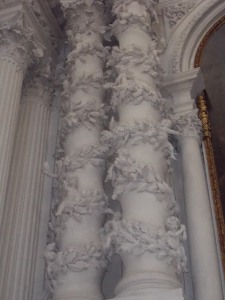 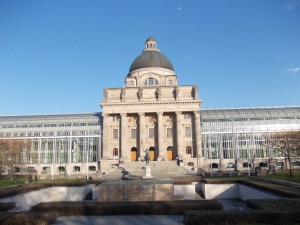 In the Englischer Garten, there is a man made river that runs through the park. At the beginning of this river, there is a man-made wave that surfers are allowed to ride. They can’t go very far but it just boggled my mind to see surfers hanging ten (or whatever the expression is) in the middle of a city park in Munich.

Video of a surfer in the Englisher Garten:

After I took a picture of this statue (I think it’s King Maximilian), I got on the tram stop right next to it because I could no longer feel my feet and went back to the hostel. Thus concluded my first day in Munich.