The (Real) Legend of Sleepy Hollow

In the spirit of Halloween, I thought I would share a local “ghost story” which is not actually a ghost story. Yet it has fascinated many people, including movie director Tim Burton who made a movie called Sleepy Hollow starring Johnny Depp (what a surprise!) using the story’s premise. As you can tell by this movie poster, I am referring to the Legend of Sleepy Hollow, also known as the story of an unlucky soul named Ichabod Crane who has the misfortune to stumble across the restless spirit of the Headless Horseman.

So how did this small town become synonymous with a super famous ghost story?

The answer has to do with the man in the following picture. His name was Washington Irving and he is the “father” of the “The Legend of Sleepy Hollow.”

Named after the first president of the United States, Irving was born in New York City in 1783. He was a prolific author and was one of the first American authors to gain recognition in the “Old World” (Europe).  “The Legend of Sleepy Hollow” was actually written while Irving was living in England and first published in 1820. It seems Irving got the inspiration for his headless horseman from northern European folklore. 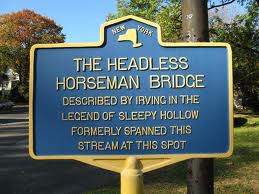 Some of the characters’ names (or at least part of them) from the story even appear on some of the gravestones, leading many to speculate Irving based some of his characters on real people who lived in Tarrytown. In fact, it turns out the name of the protagonist in the story, Ichabod Crane, was probably based on the real Colonel Ichabod Crane who Irving met in 1814 while working as an “aide-de-camp” for NY Governor Daniel D. Tompkins. Imagine my surprise when I found that out! I always wondered how Irving came up with such an unusual name. Some of the best names just can’t be made up I guess!

One of the best times to visit Sleepy Hollow is during Halloween of course! I have never been (and I can’t go this year either) but someday I hope to make it. They have all kind of events going on including evening lantern tours of the Sleepy Hollow Cemetery, a haunted house themed attraction called the Horseman’s Hollow, a dramatic reading of “The Legend of Sleepy Hollow,” and more you can read about here.

Even if you can’t go to the Halloween events, I think a visit to Sleepy Hollow/Tarrytown is a must if you’re in the area. The Sleepy Hollow Cemetery is on the National Register of Historic Places and is the final resting place of Washington Irving who ended up living in the area after many years traveling in Europe. It is also the final resting place of several prominent people such as members of the Rockefeller family, the Carnegies, Elizabeth Arden, Brooke Astor, Walter Chrysler (as in the man who commissioned the Chrysler Building in NYC), Samuel Gompers, and much more. The nearby town of Irvington was even named after Irving while he was still alive.

You can also visit Sunnyside, the house where Washington Irving lived after spending 17 years abroad in Europe. 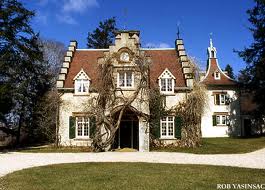 I have to admit, I have never been to the Sleepy Hollow Cemetery or to Sunnyside despite the fact they are practically in my backyard. And strangely enough, I have never read “The Legend of Sleepy Hollow” even though I am a voracious bookworm. However, I mean for that to change in the not so distant future!

What are some of the ghost stories and legends in your area?